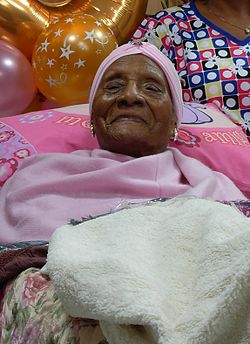 Gertrude Baines was an American supercentenarian who was the oldest living person in the world from the death of Maria de Jesus on 2 January 2009 until her own death eight months later. She married Sam Conly at a "very young age" and had a daughter, Annabelle, who died of typhoid fever at age 18. Baines lived at the Western Convalescent Home in Jefferson Park, Los Angeles when she died. She lived on her own until she was 105.

When asked what she credited to her longevity, she answered, "God. Ask him... I took good care of myself, the way he wanted me to." Baines, a daughter of former slaves, cast a vote for Barack Obama in the 2008 US presidental elections. On 11 November 2008, Baines surpassed Carrie Lazenby's (1882–1996) record of (114 years, 218 days), to become the oldest person ever who was born in the state of Georgia. She became the oldest living African American following the death of Arbella Ewing on 22 March 2008, and the oldest living person in the United States following the death of Edna Parker on 26 November 2008.
Country: USA
Na@Na