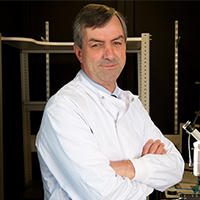 Professor Malcolm Jackson was awarded a DSc in 1994 and FRCPath in 1997. He was a Lecturer at University College London in 1982, Senior Lecturer at the University of Liverpool in 1984 and appointed Professor in 1994 before being appointed Head of the Institute of Ageing and Chronic Disease in 2010.

He is Director of the MRC-Arthritis Research UK Centre for Integrated Research into Musculoskeletal Ageing (CIMA) and serves on the MRC Population and Systems Medicine Board and the Joint Research Councils’ Life Long Health and Wellbeing Panel.

Malcolm’s primary research interests are in the roles of reactive oxygen species in cell signaling and degeneration, particularly relating to ageing and skeletal muscle. His research is funded by the MRC, BBSRC, the US National Institute on Ageing and the Wellcome Trust.
Country: UK
Visit Website
M.J.Jackson@liverpool.ac.uk
@malcolm_mjj